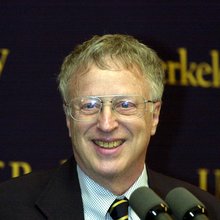 Akerlof was educated at Yale and the Massachusetts Institute of Technology, where he received his Ph.D. in 1966, the same year he became an assistant professor at Berkeley. He became a full professor in 1978.  Akerlof is a 2001 recipient of the Alfred E. Nobel Prize in Economic Science; he was honored for his theory of asymmetric information and its effect on economic behavior. He is also the 2006 President of the American Economic Association. He served earlier as vice president and member of the executive committee. He is also on the North American Council of the Econometric Association.