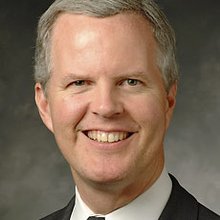 Campbell served as Dean of the Fowler School of Law from 2011 to 2016. He came to Chapman in January 2009 as a visiting Presidential Fellow and Fletcher Jones Distinguished Visiting Professor of Law. Prior to joining Chapman, he was the Bank of America Dean and Professor of Business from 2002 to 2008 at the Haas School of Business at Berkeley. Campbell was a professor of law at Stanford University from 1987–2002; Associate Professor at Stanford, 1983-1987; a member of the United States Congress from 1989-1993 and 1995-2001; a member of the California State Senate from 1993-1995; and the director of the California Department of Finance from 2004-2005. He has a B.A., M.A., and Ph.D. in economics from the University of Chicago, and a J.D., magna cum laude, from Harvard Law School, where he also served as a member of the board of editors of the Harvard Law Review. He was a law clerk to United States Supreme Court Justice Byron White and to US Court of Appeals Judge George E. MacKinnon; a White House Fellow; executive assistant to the Deputy Attorney General, Department of Justice; and director of the Bureau of Competition at the Federal Trade Commission.